Boys Across the Water - April 25 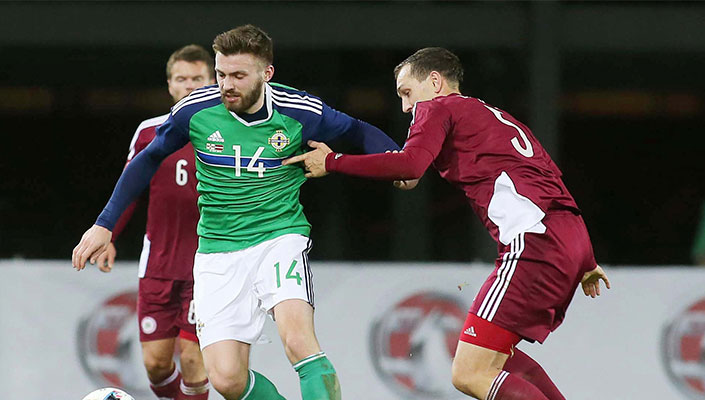 Leeds United winger Stuart Dallas continued his fine form in front of goal when his 88th minute strike secured a point for the visitors in a 2-2 draw with Championship Play-Off hopefuls Hull City on Saturday.

The former Crusaders player has now scored three goals in his last four appearances for the Yorkshire club to take his tally to five for the season.

Not surprisingly Will Grigg was also on target at the weekend hitting a brace of goals in Wigan Athletics’ comfortable 4-1 home success over Southend United as they stay on course for automatic promotion back to the Championship.

The 24 year-old, who has now scored eight times in his last seven outings for the Latics to take his total to a very impressive 26 for the campaign, was praised by his Wigan team-mate Chris McCann after Saturday’s victory.

“Will is fantastic,” declared McCann, “it’s a joy to have somebody like him in your team because even if he is not in the game he is a danger and he proved that last week at Doncaster when he got one touch in the first-half and stuck it in the back of the net.”

Also in League One midfielder Michael O’Connor scored twice from the penalty spot as Port Vale, who also had Ryan McGivern in their side, defeated Rochdale 4-1 at Vale Park.

Meanwhile in League Two, Lisburn-born midfielder Ben Kennedy bagged his first goal for Stevenage since October when he found the net in his side’s emphatic 4-1 win at Morecambe.

Former Northern Ireland under-21 midfielder James Lawrie was amongst the goalscorers as Altrincham cruised to a 5-0 home victory over Welling United in the National Conference, while another former under-21 international, defender Liam Nolan, scored Southport’s first in their 2-1 defeat of Aldershot.

The only other Northern Ireland goalscorer over the weekend was Michael Duffy who dampened Rangers Championship celebrations by finding the net as Alloa Athletic held the Glasgow outfit to a 1-1 draw at Ibrox.

On the injury front, Jamie Ward’s hamstring complaint continues to rule him out of the Nottingham Forest team while winger Shane Ferguson missed his second successive game for Millwall after picking up a thigh strain in the League One clash with Coventry on 16th April.

There was disappointment for central defender Craig Cathcart yesterday as Watford suffered a 2-1 defeat to fellow Premier League outfit Crystal Palace in the semi-final of the FA Cup at Wembley.

Finally 22 year-old Conor Brennan unexpectedly made his first appearance for Kilmarnock since September after goalkeeper Jamie McDonald got himself red-carded in the 53rd minute of the 3-1 reverse at Inverness Caledonian.