There was late heartbreak for Northern Ireland U17s as they lost 4-3 to Sweden in their final game of the 2022 Nordic Cup this afternoon.

The winning goal arrived in the eighth minute of additional time to secure victory for the Swedes at Sarpsborg Stadion in Norway.

The Scandinavians took control of the game early on, racing into a two-goal lead, but Gerard Lyttle’s side pulled one back before the break and turned the tables to go 3-2 up midway through the second session. However an 88th-minute equaliser followed by that late sucker-punch meant Sweden emerged victorious in a thrilling contest. 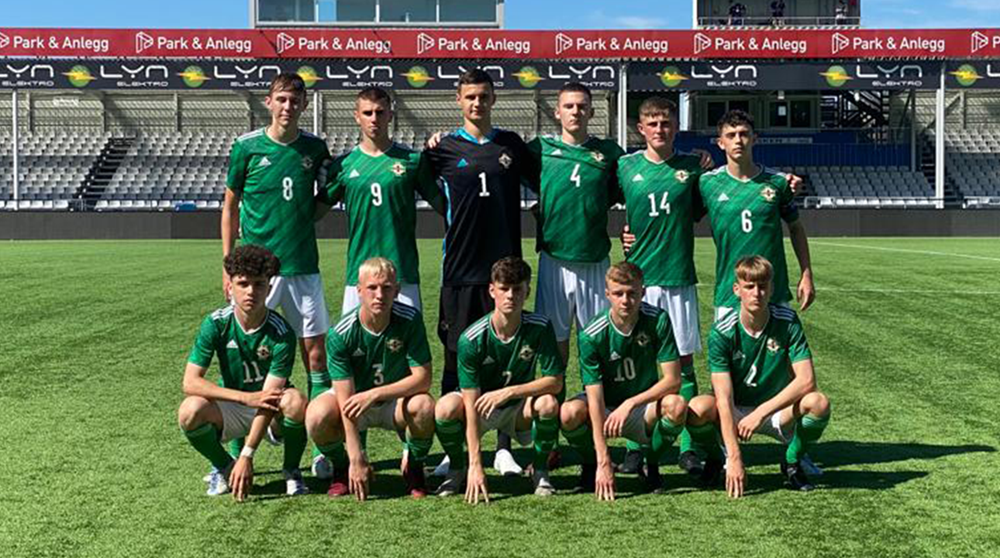 Sweden took the lead with six minutes on the clock when captain Lucas Bergvall pounced on a loose ball in the box to fire past Mason Munn.

Three minutes later Bergvall turned provider when his corner was met by Elias Risp at the near post to double their advantage.

Northern Ireland kept battling and just after the half-hour mark their persistence paid off when Francis Turley pulled one back, firing the ball home after the Swedes failed to deal with Brendan Hamilton’s free-kick from the right.

Northern Ireland were level shortly before the hour mark when a loose pass from Sweden allowed Kieran Morrison to break down the left before delivering a pinpoint cross for sub Sam Anderson to turn in from close range.

Buoyed by their equaliser Northern Ireland went one better 10 minutes later. Another sloppy pass from Sweden allowed Morrison to break again. The Liverpool youngster blazed his way up the park and made no mistake with a fine low finish into the bottom corner.

It looked to be Northern Ireland’s day until the 88th minute when another Bergvall corner was met by Ebbe Wingemark who rose highest to head home at the near post.

And then came the late, late drama. Isak Mulugeta netted the last-gasp winner with a low drive from a free-kick in a central position at the edge of the 18-yard box.