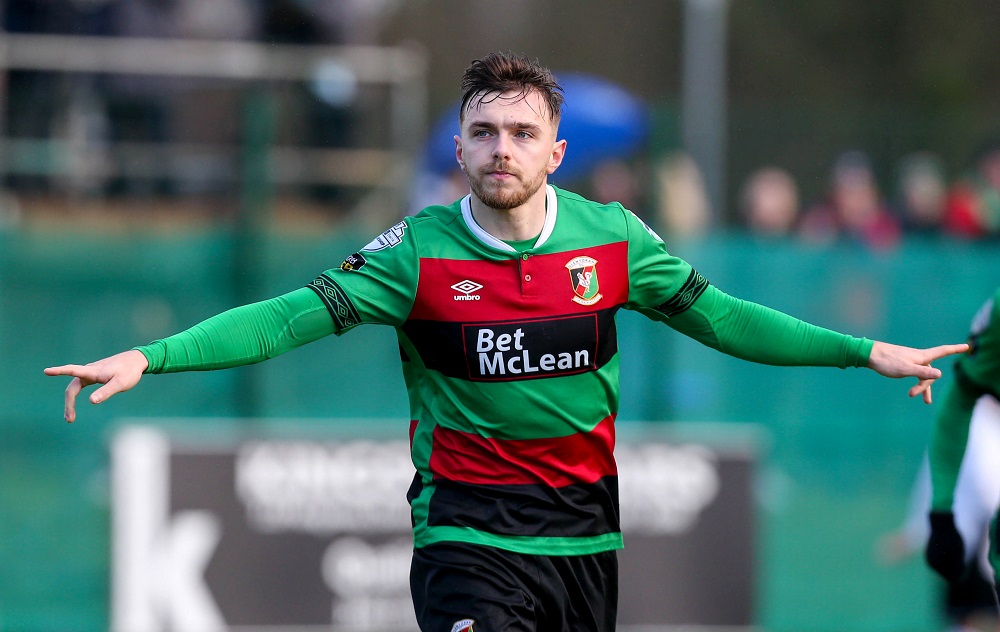 A recap of the sixth round action in the Sadler's Peaky Blinder Irish Cup which saw eight sides book a place in the quarter-finals...

They came close to causing another upset but Queen's University eventually bowed out of the Sadler's Peaky Blinder Irish Cup after going down to the odd goal in five at home to Glentoran.

The Glens, looking to avoid the same fate as rivals Linfield in the previous round, got off to a cracking start rattling the woodwork twice before Robbie McDaid opened the scoring on five minutes after keeper Declan Brown had spilled the ball.

The students hit back midway through the first half courtesy of a Jonah Mitchell near post header before McDaid bagged his second of the afternoon a couple of minutes from the break with a deflected effort from Joe Crowe's cross.

However, Queen's responded almost immediately. Matty Hughes cleverly jinked past a couple of defenders before unleashing a low shot into the bottom corner to draw the teams level going into half-time.

But, with a quarter of an hour remaining, Glentoran secured their place in the last eight with McDaid's hat-trick goal with a close range finish from Elvio van Overbeek's cross.

Mick McDermott's side will face holders Crusaders in the quarter-finals.

The Crues swept to a comprehensive 5-1 defeat of fellow Premiership side Carrick Rangers at the Loughshore Hotel Arena.

Jamie McGonigle kicked the scoring off as early as the fourth minute with a superb turn and shot from the edge of the box, with Jordan Owens making it 2-0 just after the half-hour mark.

Rangers did pull a goal back a few minutes later when Lee Chapman's deflected effort went past Gerard Doherty but Jordan Forsythe restored Crusaders' two-goal cushion moments from the break.

Carrick's Reece Neale unluckily turned the ball into his own net while attempting to clear Paul Heatley's cross early in the second half before Owens completed the scoring on 74 minutes with a header.

Also bagging five goals were Ballinamallard United in their victory over Knockbreda at Breda Park.

The evergreen Ryan Campbell swooped to open the scoring on 14 minutes and grabbed another with 10 minutes remaining. Ryan Mayse (57), Richard Clarke (76 pen) and Joshua McIlwaine (90) also found the net for the Mallards while Breda responded with efforts from Brendan Bennett (63) and Darren Smyth (86).

Harry McConkey's side, losing finalists last season, will host Ballymena United in the next round.

The Sky Blues came from behind to defeat Warrenpoint Town at Milltown. Brandon Doyle had edged 'Point in front early in the second half with a follow-up from Alan O'Sullivan's blocked effort but Kyle Owens responded on the hour with a header after James Knowles had delivered a corner.

The winner came two minutes from time via Andy McGrory with a near post finish after running on to a Leroy Millar pass.

Only two sides, Larne and Coleraine, kept clean sheets and, ironically, they will lock horns in the quarters at Inver Park.

Larne were taken to extra-time by East Antrim neighbours Ballyclare Comrades at Dixon Park with Dean Jarvis popping up unmarked in the 98th minute to turn home the winner.

Coleraine, on the other hand, hit three goals without reply at home to Banbridge Town.

The Bannsiders led at the break thanks to Aaron Canning's 16th minute header but they had to wait until midway through the second half to put some shine on the result when substitute Emmett McGuckin came off the bench to knock home a brace.

The Swifts were taken to extra-time by Championship opponents Newry City after twice going behind. Mark Hughes fired Newry in front on 16 minutes from the rebound after his spot-kick was initially saved before Caolan McAleer levelled for the Swifts just shy of the half-hour mark.

Mark McCabe restored Newry's lead with a 58th minute effort into the bottom corner but Dylan King scrambled home an equaliser to force an extra half an hour.

Two goals in the first period of extra time from Ryan Waide and Kris Lowe then made sure of the Swifts' progression.

Cliftonville successfully negotiated the challenge of Amateur League visitors Rathfriland Rangers, although it wasn't entirely plain sailing for the Reds.

Jamie Harney found the net with a looping header on 11 minutes but any anticipated goal rush didn't materialise.

Indeed Rathfriland levelled on 64 minutes through Stephen Hughes' near post finish at the second attempt but, within three minutes, Ryan Curran re-established Cliftonville's lead before Joe Gormley added a third in stoppage time just to make sure.