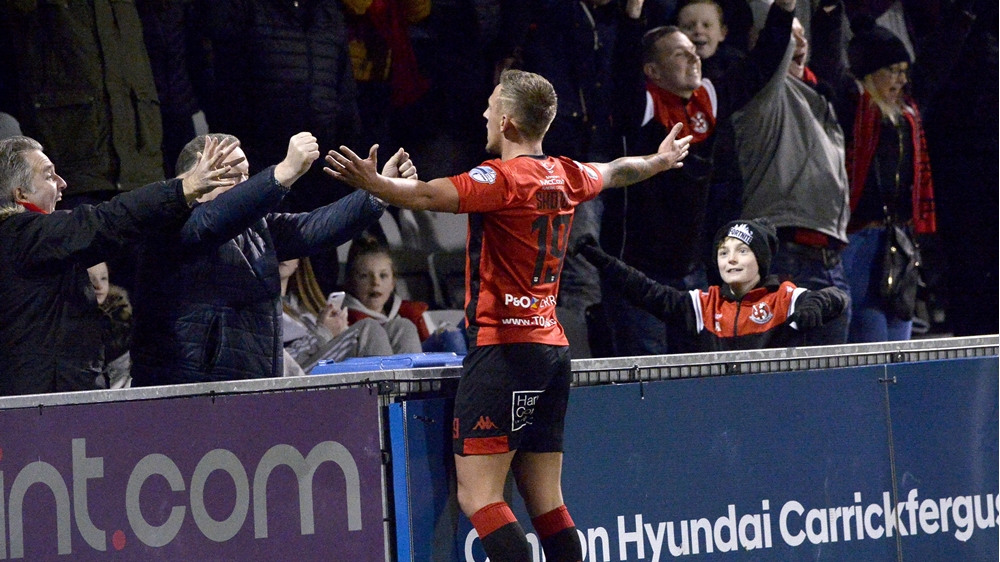 Tennent's Irish Cup Fifth Round day is always one of the most talked about dates in the calendar and this year proved to be no exception.

On this occasion, however, it was some of the lesser lights that grabbed the headlines with Crumlin Star, Larne Tech. OB and Strabane Athletic all claiming notable scalps.

Crumlin Star travelled to Lakeview Park to sweep to a 4-1 defeat of Championship opponents Loughgall.

The Amateur League side raced into a three-goal lead inside half-an-hour. Gary Lavery opened the scoring on 12 minutes before Barry McKervey hit a quick fire double soon after with Ciaran Murphy adding a fourth late on.

Larne Tech. OB hit two without reply to overcome Limavady United at The Showgrounds. Goalkeeper Chris Keenan opening the scoring from the spot after just four minutes with Paul Maguire doubling up before the break, a deficit from which the Roesiders never recovered.

The East Antrim side will face Strabane Athletic in the next round who, themselves, overcame second tier opposition in the form of Knockbreda thanks to a couple of Warner Mullen goals, one in each half.

Holders Coleraine kicked off their defence with a relatively trouble free defeat of HW Welders at The Showgrounds.

The Bannsiders moved in front just before the break in somewhat fortunate circumstances when Welders defender Chris Morrow turned the ball into his own net whilst attempting to clear Alexander Gawne's shot before, with around a quarter-of-an-hour remaining, substitute James McLaughlin doubled the lead with his first touch.

Last season's losing finalists, Cliftonville, fell at the first hurdle however when Seanan Clucas' goal midway through the first half handed Dungannon Swifts victory at Solitude.

That was one of three all-Premiership clashes with Crusaders and Warrenpoint Town progressing courtesy of victories over Glentoran and Institute respectively.

Paul Heatley opened the scoring for the Crues at Seaview early in the second half, but new Glentoran signing Luckas Gwiazda levelled almost immediately. However, Heatley restored the home advantage before Jordan Owens and Matthew Snoddy added later goals to give the scoreline a more convincing look.

Meanwhile, at the Brandywell, 'Point led through Dean Curry's first half own goal with Lee Duffy, on his Warrenpoint debut, made it 2-0 with five minutes remaining.

The top two in the Championship accounted for the bottom two in the Premiership.

Daniel Kelly's early strike was enough to secure victory for Carrick Rangers away to Ards while, at Inver Park, David McDaid and David Scullion found the net for Larne as they defeated Newry City.

Ballymena United and Linfield didn't have it all their own way against Championship opposition despite both being locked in a title tussle at the top of the Premiership.

The Sky Blues did eventually defeat Dundela 3-1 at Wilgar Park but the Duns gave David Jeffrey's side a second half scare and might have clawed back a two-goal deficit only for a missed penalty while Linfield relied on a solitary Joel Cooper goal with over an hour gone to see off Ballyclare Comrades at Windsor Park.

Queen's University got the afternoon off to a blistering start with a six-goal lunchtime defeat of Lisburn Distillery at The Dub. The Students stormed into a commanding 4-0 lead after 22 minutes thanks largely to a superb seven minute hat-trick from Ryan McCready.

Whilst Peter Thompson's side topped the scoring charts they were almost matched goal for goal by Glenavon and Ballinamallard United.

Stephen Donnelly bagged a first half double for the Lurgan Blues against Rosemount Rec. at Mourneview Park, a feat matched by Gary Hamilton after the break. Indeed, the Glenavon player-manager squandered the chance to claim the match ball when he missed a penalty late in the game.

He couldn't get a hat-trick, could he⁉️@Glenavon_FC manager Gary Hamilton grabs his second of the game against @RecRosemount

Ballinamallard fought back from a goal down to comfortably defeat the PSNI at Ferney Park. Trailing to a Tony Tumelty finish, goals from Nathan Cashel, Ryan O'Reilly, Richard Clarke and Robbie Hume helped Harry McConkey's charges safely through.

Elsewhere, a late Lee McNulty winner secured a place in the last 16 for Dergview at the expense of Maiden City at Darragh Park.

🏆 Confirmation of the @TennentsNI Irish Cup sixth round draw - some cracking ties to look forward to! ⚽️ #IrishCup pic.twitter.com/504SxxqR6G