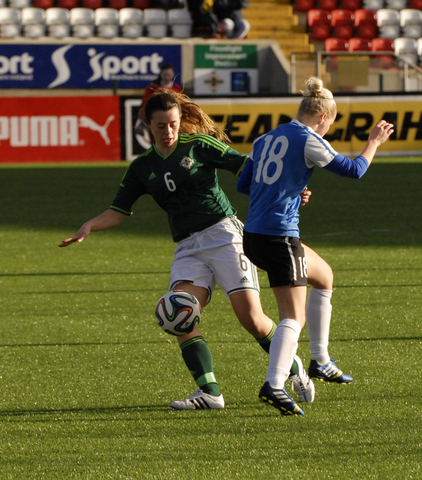 Northern Ireland dominated from the beginning and created some early chances. Northern Ireland midfielder Samantha Kelly started the brightest and within the opening minutes, she stood in disbelief as her shot from close range skimmed the crossbar. A few moments later Kelly had another chance, this time cannoning the crossbar from a similar situation.

The home side continued to apply the pressure on the visitors and after only 12 minutes defender Sarah Haddock reacted the quickest from a scramble in the box to knock the ball underneath the Estonia goalkeeper and give Northern Ireland an early lead. Chloe McCarron was unlucky to see her wonder-strike from distance dip in the last seconds and hit the crossbar with real force. Three goal-hero from the teams previous encounter, Aimee Mackin give Northern Ireland a 2-0 lead after 21 minutes. The attacker showed real skill and balance to skip past four defenders before slotting the ball into the bottom right corner.

Northern Ireland finished the half on the attack as striker Moya Feehan came very close when she leaped the highest from a corner-kick to glance her head towards the top left corner of the net, only to see the fingertips of the Estonia goalkeeper claw the ball away and produce a top class save.

HALF-TIME: 2-0
Northern Ireland head coach Alfie Wylie adjusted his squad during the interval and made three changes for the restart. Substitute Sarah Connolly was keen to impress and had the earliest of chances, making the Estonia goalkeeper work both times. Connolly did not take long however to get her name on the score sheet and it was on the 54th minute when she pounced on a mistake in the Estonia backline and finished confidently. Aimee Mackin on the 63rd minute struck a wonderfully curling free-kick from the edge of the box which clipped the inside of the post and fell to Connolly who tapped the ball into an empty net to double her tally and make it 4-0.

Northern Ireland continued to work hard with Rachel Newborough’s long-range effort sailing over the bar in 72nd minute. As the game progressed, Annie Timoney found herself in space and decided to have a shot from distance, striking the underside of the crossbar. Moya Feehan made it 5-0 on the 85th minute as her driving shot on the edge of the box rippled the roof of the Estonian net.

Northern Ireland despite being in a comfortable lead, showed great attitude and worked tirelessly hard until the very end. Such efforts were rewarded as they gained two further goals in injury time. The first, a thumping header from Nichiarrain at the back post and the second, a powerful strike from Mackin within the box.

The game ended 7-0 to Northern Ireland who again showed remarkable talent and provided an enjoyable spectacle for spectators. 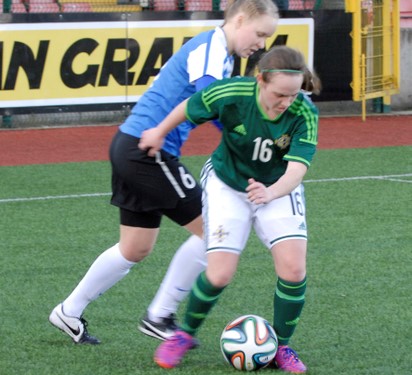 Samantha Kelly (16) wins her tussle with Anett Vilipuu in a friendly against Estonia in February. 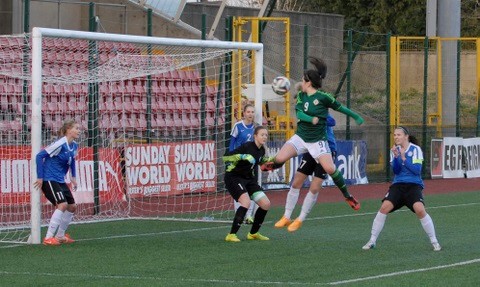 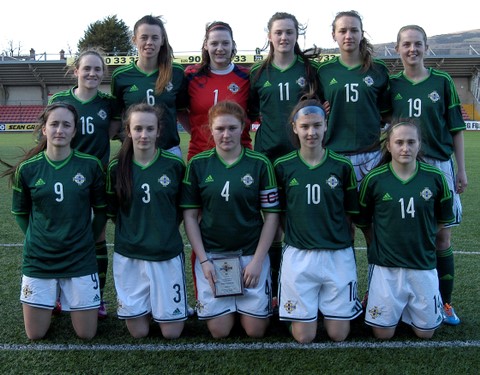 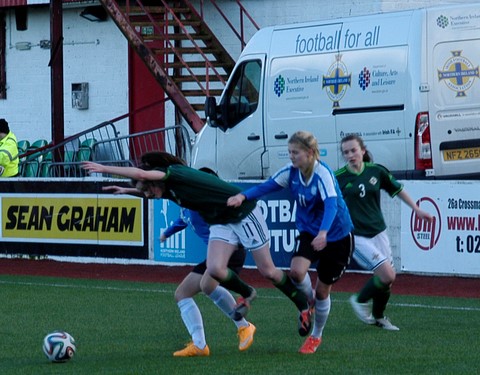 One way of stopping Aimee Mackin!