Northern Ireland To Play Belarus In May 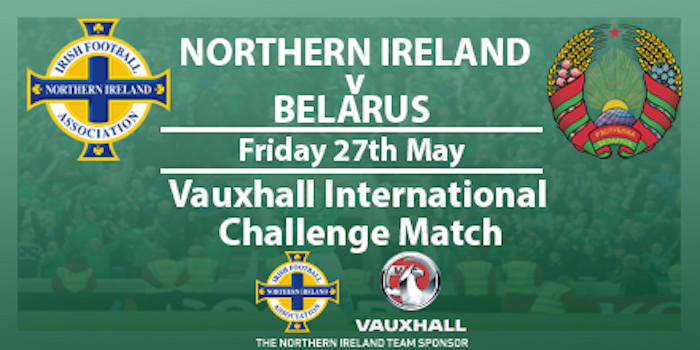 Belarus will provide the opposition for Michael O’Neill’s team at the National Football Stadium at Windsor Park that evening (7.45 kick-off).

The Vauxhall International Challenge Match against Belarus will provide an opportunity for Northern Ireland fans to wish the team good luck as they prepare for EURO 2016 in France.

Belarus played in the same Euros qualifying group as Ukraine, who Northern Ireland face in their second group game at the finals, and automatic qualifiers Spain and Slovakia. They ended their qualifying campaign strongly with wins over Luxembourg and Slovakia and a draw against Macedonia.

Northern Ireland manager Michael O’Neill said: “Belarus have had a solid season so far and they will provide a good test for us as we build towards our first game in France.

“The game, of course, will also act as a send-off for the team so I’m sure there will be a great atmosphere in the stadium, which the players will really appreciate.”

The game on 27th May will be Northern Ireland’s first ever international against Belarus.

Most of the Belarus players play their club football in their own country – six players from European club competition regulars BATE Borisov featured in their last squad – or in Russia.

Their squad includes Egor Filipenko, who plays for Malaga in La Liga, Stanislaw Drahun of Russian side Dynamo Moscow, BATE star Mikhail Gordeichuk and Anton Putsila, a key player for Turkish side Gaziantepspor.

Following the training camp in Austria and the game in Slovakia, Northern Ireland will jet off to their base camp in France to complete their preparations for their first group game at the Euros - against Poland in Nice on 12th June.​

Ticket details for the Belarus fixture will be announced in the coming weeks.